Feast of Trumpets – What We Learn As Christians 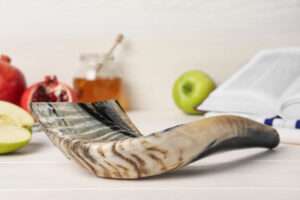 The End of the Age. What emotions does that statement provoke? It can be a controversial subject for God’s people. It’s a Biblical topic that many Christians find difficult to engage with. And there is no shortage of perspectives on how current events relate to Biblical end times.

Old Testament feasts and celebrations bring into focus end times through Jewish eyes. There are seven feasts in the Jewish calendar traced to the Old Testament. These early feasts may foreshadow Jesus’ first coming. The remaining three, celebrated in September, are said to prefigure His return.

Pastor Enoch Lavender is a pastoral leader at Shalom Israel and serves on the board of ‘Teach all Nations’. The focus of his work is Hebrew and Jewish studies.

Enoch believes that the first four feasts very specifically foreshadowed Jesus’ first coming.  Jesus was the great lamb who died on Passover. Every year the people were sacrificing the lamb, but it was a precursor of what was to come.  The first four feasts pictured Jesus’s death, resurrection and the outpouring of the Holy Spirit.

After that, there was a break in the Jewish calendar for three months with no celebration. Then the people came together again for the Feast of Trumpets. This celebration is exclusively described as one dedicated to blowing and sounding the trumpet. Throughout the land of ancient Israel, even to this day, the trumpet will sound all over the nation.

“The Feast of Trumpets is celebrated with the sounding of the trumpet,” says Enoch. “But there is very much an understanding within the Jewish community that this is a picture of the great final day when the Lord himself will come. They have a different understanding than Christians, because we are expecting the Messiah to return and they’re expecting Him to show up for the first time. However, we see in the New Testament again and again, references to the trumpet, connecting with His return.”

Paul wrote to the Thessalonians, and said that the Lord would descend with an archangel and the sound of the trumpet. Even now, as Jewish people celebrate, they prepare their hearts by seeking to get their lives right with God. It’s a beautiful lesson as we think about the truth that one day the Lord will return, and how important it is that our hearts are ready.

“Traditionally, the whole community would be waiting for the sighting of the new moon,” says Enoch. “Two witnesses would appear in Jerusalem declaring that they have seen the new moon. They would be asked some key questions by the Sanhedrin, the members of the Jewish court. Then the court would decide, yes, the new moon has been sighted and an announcement would be proclaimed throughout all of Israel.”

There is an uncertainty about exactly when it will happen, but everyone knows it’s coming. Everyone is getting ready. That is a picture for us as believers, because we know that Jesus is coming soon, but we can’t set a specific date and proclaim it. We know that He wants us to be ready, but there will be an element of uncertainty in terms of the exact day and the hour. That’s why we need to be ready right now.

“Leading up to this day, time is dedicated to getting one’s lives in order,” continues Enoch. “In a sense to balance out the spiritual checkbook. It’s not just about being in right relationship with God, it’s also a time to get right with your fellow man. So traditionally Orthodox Jews will not only be repenting towards God, but also towards their fellow Jews or anyone else they might have wronged.”

“It’s so important that we’re not just living our lives to be right with God. We also need to do the work in our relationships on earth, doing the best we can to forgive those who are wrong, and ask for forgiveness from those we have wronged. “

“We want to be ready for that day.”