Mrs Augusta lives in the village of Deleso, in the District of Ermera. 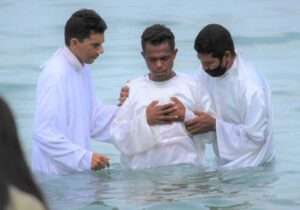 In November 2020 her oldest son Álvaro contacted Radio Voz during our daily Morning Prayer program, requesting prayers for his mother who have been evil spirit oppressed for a couple of years already. She even got lost in the jungle, and even though the family looked for her, they were not able to find her for three months. The situation became much worse during the full moon season.

In addition to that, the people in the village started to see her as the one who attracts all kinds of evils to the whole community in the village, and they started to persecute the family. Even in the school, when a student got sick or had an accident, the students blamed the two daughters who were also students at that school. The family was facing a really difficult time.

The oldest son Álvaro decided to bring his mother to the capital Dili. It was when he contacted Radio Voz early in the morning asking for help in prayer. We prayed for her and for the safety of the entire family. Some days later he came to meet with the Radio Voz team because the family situation was unbearable. We prayed together and ministered the Word of God to him and demanded from him that he should bring his entire family to Christ, in order for the entire family to get delivered. The next Thursday evening service he brought his mother to the church to receive prayers. After that day on she got completely free from the evil spirits oppression, and until now, four months later, there have been no more manifestations of oppression in her life, even during full moon season.

Then Álvaro brought his brother and the two teenage sisters who all accepted Jesus, and were baptized in the first Saturday of February.

They are all attending every service in the church, happy for what the Lord had done in their family. Now, for safety reason, only the father remained in the village, to take care of the house and land, while the mother and the two sons are in Dili, and the two girls in Aileu, living in our church there.