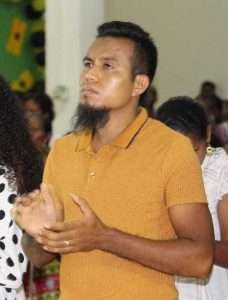 Back in June Amali called Radio Voz and asked for prayer so he and his wife could have children because they had been married for a long time but had not been blessed with children. Therefore he asked to be prayed for, and we prayed for him regularly.

In November when we had a meeting between announcers and listeners in the park. Amali came and thanked our Radio Voz team with tears. He happily reported that his wife was pregnant and had been three months.

At Radio Voz’s 17th birthday yesterday we invited him to participate and we shared the happy news he received from God to the congregation and to other listeners.