Families in Vanua Levu had received their copies of The Word for Today. 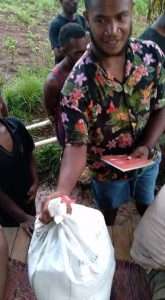 The booklet was distributed with food rations with the help of one of UCB Fiji’s Committee members, Amani Waqetia. Amani heads up the response effort of OLA FOU Fiji in Vanua Levu. The families who received them were very appreciative especially after being devastated by the Category 5 cyclone leaving many of them without food and shelter. In the midst of such a devastating experience, their hope lies not only in the relief items but more-so with God and the encouragement that comes with the stories of hope in The Word for Today.

More than 100 copies of the  were distributed to Cyclone and flood affected areas of Vanua Levu.

Friends, who were recipients of the The Word for Today in Vanua Levu, said that the booklet has given them a sense of hope and courage reading God’s Word in the most difficult time of their life after the hardship faced and the devastation cost by TC Yasa where they seem to have lost everything.